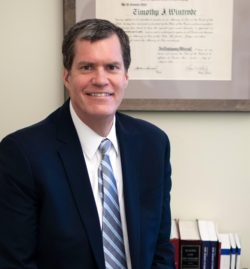 Timothy J. Wintrode graduated from Rider University with a Business Degree in 1991 and from Widener University Law School in 1994, where he obtained a Juris Doctorate. In 1994 he was admitted to practice law in both New Jersey and New York, and began his career as Law Clerk to the Honorable Edward M. Oles, J.S.C. in Ocean County, New Jersey.

After serving as both a County assistant prosecutor and a Municipal prosecutor in over 15 towns in Ocean and Monmouth counties, Tim began his next chapter as a criminal defense attorney. Over 20 years later, Mr. Wintrode continues to aggressively defend his clients each day in Courts throughout the State of New Jersey.